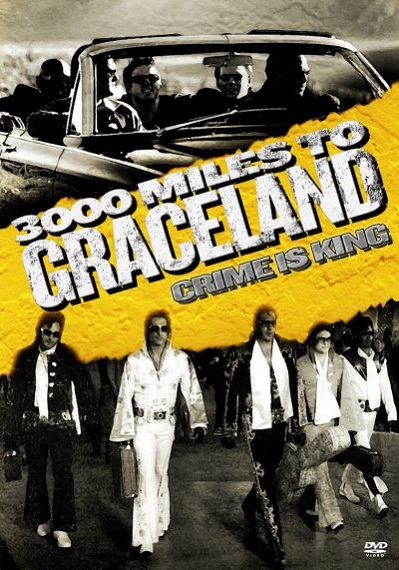 The film opens outside of Las Vegas, in the scorching Nevada desert. Michael (Kurt Russell) stops at the Last Resort Hotel and Cafe, where he gets a room. As he is going back to his car, a little kid named Jesse (David Kaye) takes two of the custom skullhead valve caps off of Michael’s car. Michael chases him, but Jesse kicks him in the shin. Jesse then runs into the arms of his young mother Cybil (Courteney Cox Arquette), who makes Jesse give back the caps. Michael is immediately attracted to her, and asks her to breakfast. He then has sex with her. Later, a car with four men dressed like Elvis pull up, Murphy (Kevin Costner), Hanson (Christian Slater), Gus (David Arquette), and Franklin (Bokeem Woodbine). Murphy picks up Michael from the motel, and the five of them venture out to an airplane hangar, where they meet yet another con, Jack (Howie Long), a helicopter pilot. Inside the hangar are five suit and guitar cases. Michael goes back to the motel, where he knocks on Cybil’s door looking for his missing wallet, which her son took. She reaches into a crawlspace in the ceiling and finds Michael’s wallet, and gives it back to him. He is about to leave, but Cybil yet again lures him back into bed.

The next day, Michael drives back to Las Vegas. He joins the other four men, who are all dressed up as Elvis. It’s International Elvis Week in Las Vegas, so everybody there is dressed as The King. Michael and Murphy’s plan is to rob the Riviera Casino in broad daylight, dressed as Elvis, so no one can identify them. As the five are walking towards the money cages in the back, a previous acquaintance of Murphy’s recognizes him and greets him. Murphy ends up knocking him out in order to keep his anonymity. As they get closer to the back, Michael breaks off, and gets into an elevator. The rest of them burst into the room, with machine guns, and grab the money. The security cameras watch all of this, and notify the hotel security and Vegas PD. The plan is not to walk out into the streets, but rather get to the roof, and be picked up by Jack in the helicopter. Murphy and the other three are almost at the elevators, where Michael is waiting, but Murphy sets off panic when he blows away a security guard. A huge gunfight occurs within the casino, with the security being mostly cut down to size. Michael opens the elevator door, and sees a security guy with his back to him. Michael is about to shoot him, but knocks him out instead. As the men enter the elevator, a Las Vegas police officer starts shooting into the elevator, hitting Franklin in the chest. Murphy sticks his gun through the crack in the doors and shoots the officer in the head. They make it to the roof, but Jack isn’t there yet. They hold off the cops and security on the roof, until Jack arrives. Murphy tries to save Franklin, but Franklin finally dies from his wounds. Murphy then throws Franklin’s dead body out of the helicopter.

The group now go back to Michael’s hotel, where Jesse is hiding and watching everything. Hanson counts the money, which comes out to $3.2 million. The four split up the money. Hanson also decides to split up Franklin’s cut, but Murphy refuses, saying Franklin’s cut should go to him. Hanson gets upset with Murphy and points his gun at him, but doesn’t shoot him. After he puts his gun away and sits back down Murphy shoots Hanson under the table hitting him in the leg, then shoots him again in the chest killing him. Gus, Michael, and Murphy now have to dispose of the body, so Michael hides the money in the crawlspace, and the three drive out to the middle of the desert to bury Hanson. While there, Murphy shoots Gus and Michael as well. Murphy is driving back, in Michael’s car, when several coyotes wander out onto the road, causing Murphy to hit one and swerve off the road into a ditch, where he is knocked unconscious. The news spreads about the robbery, making headlines, and sparking the interest of two federal marshals, Quigley (Thomas Haden Church) and Damitry (Kevin Pollak). They learn that Murphy is the mastermind, thanks to the man that Murphy knocked out in the casino. They also learn that Murphy thinks he’s the son of Elvis. Michael, left for dead suddenly awakes, and hitchhikes back to his hotel room. He takes two bullets out of his bulletproof vest. He reaches into the crawlspace to get the money, but it’s missing. Michael storms into Cybil’s place and grabs Jesse. Cybil threatens to call the police, but Michael suddenly finds the money, causing Cybil to hang up. Michael decides to pay Cybil off with $100,000 for silence, but Cybil wants to go with him. Suddenly, the police knock at the door, responding to Cybil’s emergency call. The police believe that Cybil dial 911 by accident and Michael leaves the hotel with Cybil and Jesse.

The next morning, Murphy drives back to the hotel, but does not find the money. Michael explains to Cybil that the money is marked, but Murphy worked out a deal with a real estate man in Twin Falls, Idaho named J. Peterson (Jon Lovitz), who would exchange the money with them for 70 cents to the dollar, so they’re on their way to meet him. However, Murphy is following them. Along the way, he kills almost everyone he meets. Meanwhile, Michael, Cybil and Jesse are eating at a restaurant, but Cybil cleverly sneaks away, and steals Michael’s wallet and car. So now, Michael is stuck with Jesse, with no car or money. Jesse, however, is a clever thief, and steals money through pickpocketing and even steals a truck for Michael. Cybil calls J. Peterson and says the password, “Cleanliness is next to godliness.” Peterson decides to wait for her, but Murphy suddenly appears, saying the same thing. Peterson explains that Cybil called first, so he must wait for her.

Finally, Cybil arrives, and finds only Murphy, who she assumes is Peterson. Then, Michael and Jesse arrive, and find the place empty, except for Peterson’s dead body in the bathroom, next to a dead woman. Jesse starts to cry, thinking it’s his mother, but it’s really Peterson’s secretary. Murphy is driving Michael’s car, so Michael calls the cops and reports his car stolen. Murphy is then arrested, but Michael is also arrested when it is learned that the truck he is driving is stolen as well. Murphy and Michael are put in neighboring jail cells, where Murphy explains how he thought Michael was dead. Michael asks where the girl is, but Murphy is very obscure about his answer. Suddenly, Michael makes bail, thanks to Jesse, who hired a lawyer, under the agreement that Jesse make him his partner. Michael is set free, however, with his one phone call, Murphy calls Jack and arranges to get out as well. Michael and Jesse get to Michael’s car, and opens the trunk, and finds Cybil, tied up but still alive. Murphy is now out, and is hitchhiking. He is picked up by a college football fan, with team attire and face-paint. When they come to a roadblock, Murphy kills the fan, and puts on his clothes. He pretends to be a fan in front of the cops, and they let him go. Murphy sees Cybil and Jesse pass by in a car. He runs them off the road, and grabs Jesse, to hold as collateral so that Cybil will go get Michael and the money. Cybil finally finds Michael and he decides to go find Jesse.

Murphy has met back up with Jack, who has enlisted the help of a one-man army by the name of Hamilton (Ice-T). Michael appears with the money, and puts a gun to Jack’s head, and offers to exchange for Jesse. Murphy and Michael swap, but it is revealed that the bag with the money is actually filled with newspaper and a scorpion that stings Murphy’s arm as he reaches into the bag. Suddenly, a SWAT team, led by Quigley and Damitry, surround the place. Murphy puts his hands up, but quickly grabs a shotgun and shoots Michael. Another huge gunfight ensues, with Jack and Murphy shooting their fair amount of cops. When some cops are about to shoot Murphy, Jack jumps in the way and is shot. As the police are surrounding him, Hamilton appears and shoots many cops. Quigley, however, shoots Hamilton. Murphy is now alone, getting weaker from the scorpion sting and the marshals realize that he’s not giving up. Murphy is finally put down, after a barrage of bullets tear into him. Michael is rushed by ambulance to the nearest hospital. However, the ambulance is stolen by Cybil and Jesse. Michael, once again, wore a bulletproof vest, and is only injured in the shoulder. The last scene shows Michael, Cybil, and Jesse on Michael’s boat, sailing away. The name on the side of the boat reads Graceland. Implying Michael was the other illegitimate son of Elvis, as 2 of the 75 alleged illegitimates were real.