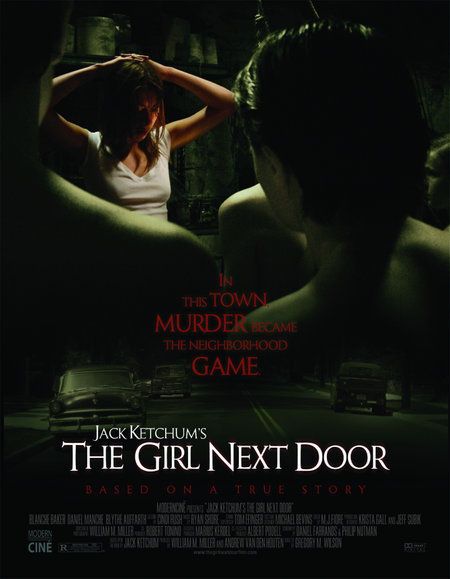 Based on Jack Ketchum’s novel with the same title, which is based on the true story of Sylvia Likens, who was tortured and killed in 1965 in Indiana.

The movie starts in contemporary New York City when 50ish stock trader David Moran (William Atherton) sees a homeless man hit by a car. He acts immediately to save the man’s life by giving him mouth-to-mouth resuscitation. Later, at home, Moran sits studying a drawing obviously made by a child. The incident that day has reminded him of a time in the summer of 1958 when he failed to act to save a life. The rest of the film proceeds as a flashback.

Teenage David Moran (Daniel Manche) is down catching crawfish at the local stream when he runs into the new girl in town, 16 year-old Megan Loughin (Blythe Auffarth). Megan and her little sister, ten year-old Susan (Madeline Taylor), have just moved in with David’s next door neighbor, divorcee Ruth Chandler (Blanche Baker) and her three sons. Meg and Susan have recently been orphaned after a car accident that left Susan crippled.

The Chandler household is a big teenage hangout in the neighborhood. Mrs. Chandler (who the kids call “Ruth”) is considered a cool parent as she secretly lets the kids drink beer and plies the boys with salacious talk.

When David runs into Megan a couple days later she tells him that nothing she does seems to please Ruth. David has an idea to make peace between them: he suggests that Megan draw a picture for Ruth. Meg does not want to do this as she is afraid that Ruth with ridicule her. David suggests instead that Megan draw one for him. She does this (it is the picture the adult David is contemplating at the beginning of the film) and David presents it to Ruth telling her that Megan drew it for her. Ruth sees through this and rejects the drawing telling David to keep it.

When David arrives at the Chandler house a couple days later he finds the Chandler boys tickling and groping Megan. She hits one of them hard and runs from the room. Ruth arrives and takes the boys side of the argument. She would like to punish Megan, but as she is gone, Ruth instead decides instead to punish Susan for “conniving” with her sister and gives Susan an sound, old-fashioned, bare-bottom spanking with a toilet brush while the boys watch. Megan returns to her sisters cries and is forced to watch the beating.

The next day Meg reports this to police officer Jennings (Kevin Chamberlin) who speaks to Ruth. Ruth is able to deflect his inquires, however, and confronts Megan telling her she will find a way to keep her from running to police with her complaints.

The next day when David arrives for a sleepover, he finds the whole household in the basement. Megan has been blindfolded and tied from the rafters by her wrists. She is standing on a pile of books and each time she refuses to confess to something Ruth has accused her of a book is pulled out increasing the strain on her arms. When the books are gone Ruth allows her oldest son, Willie (Graham Patrick Martin) to use his knife to strip the girl naked. When Meg still fails to cooperate, Ruth decides to leave her in this position all night. Before exiting, however, Ruth makes the chilling observation that if Megan is still difficult she may switch the girls’ roles and let Megan watch while her ten-year-old sister takes her place stripped and hanging from the rafters.

That night David can’t sleep thinking of Megan in the basement. He talks the other boys into sneaking downstairs to ease her bonds and give her something to drink. The other boys cooperate, though it is clear they fear Ruth finding out.

Over the next few days David tries to help Megan out by slipping her a knife to cut her bonds and leaving the basement door unlocked so she can escape. She gets out, but is caught when she tries to sneak Susan out of the house too.

David tries telling his parents what is happening, but fears Ruth too much.

Megan’s torment reaches a peak one afternoon when the whole household, David and several other teenagers (including girls) are in the basement. Meg is tied naked on a unpadded metal box spring while Willie is allowed to rape her and the rest watch. When he is done the neighborhood punk, Eddie (Michael Zegen) suggests that they “cut” her. Ruth likes this idea and uses a sharpened, hot, bobby pin to carve a sexually explicit message into Meg’s abdomen. Ruth observes this will keep any man from wanting her and suggests that to keep Meg from wanting a man they use female circumcision on her.

This suggestion to too much for David and he tries to bolt the room to get help, but is knocked to the ground. Ruth then proceeds to circumcise Meg using a propane torch.

When David awakes he finds his hands are tied and he is locked in the basement with Susan and Megan. Fearing Ruth will kill them all; he gets his hands free and comes up with a plan for escape: he fills a metal pot with rags and sets it ablaze. The smoke rolls up the stairs and out under the edges of the house. When Ruth races through the basement door to find out what is going on, David hits her over the head with Susan’s crutch, apparently killing her. Willie knocks David to the ground and is about to knife him when Officer Jennings and the police, who have seen the smoke from the street, intervene and subdue Willie.

While Megan lays waiting for EMS, David lies next to her and asks her forgiveness for not acting sooner. She forgives him and tells him she was glad that he acted in the end. Megan then dies.

Back in contemporary times we see the adult David kneeling by the stream where he first met Megan. He tells the audience he will never forget her. In the reflection of the water we see a teenage Megan briefly appear kneeling beside him. She disappears and the picture ends. 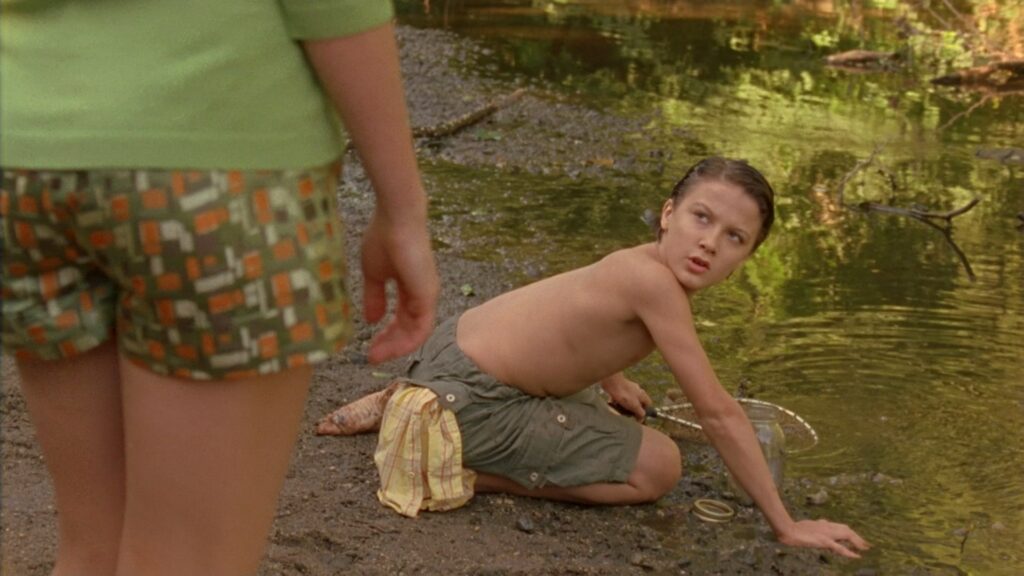 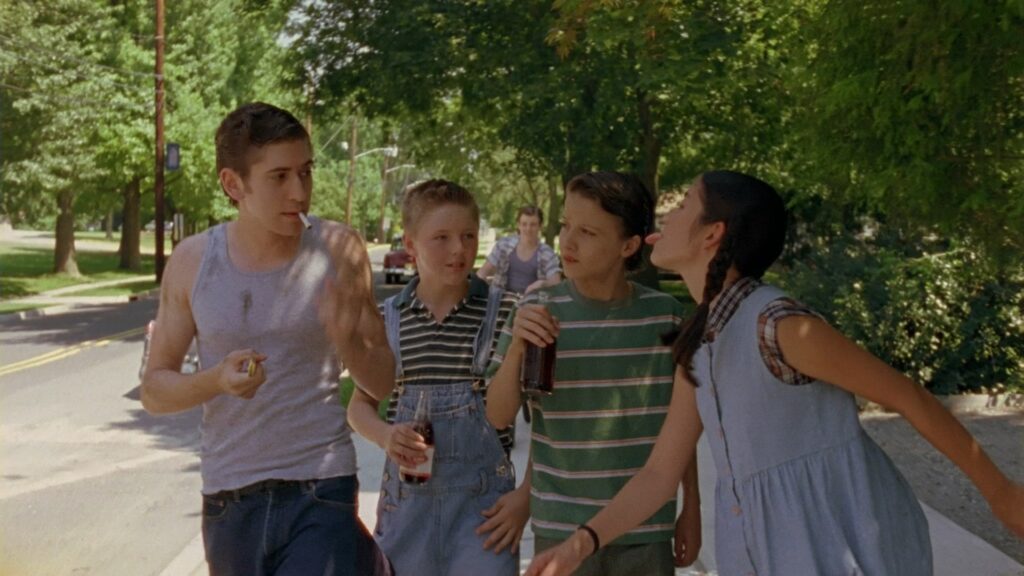 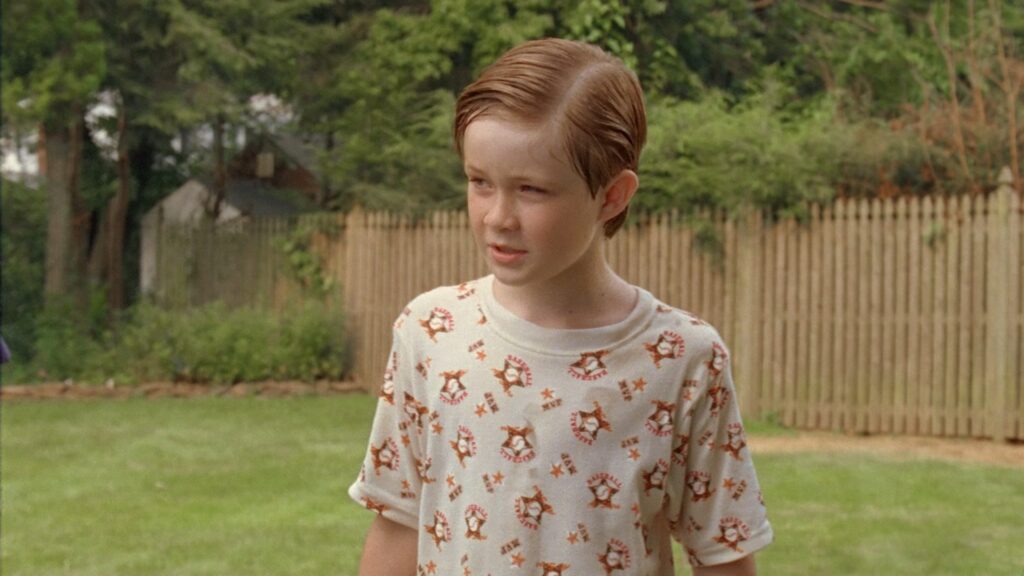 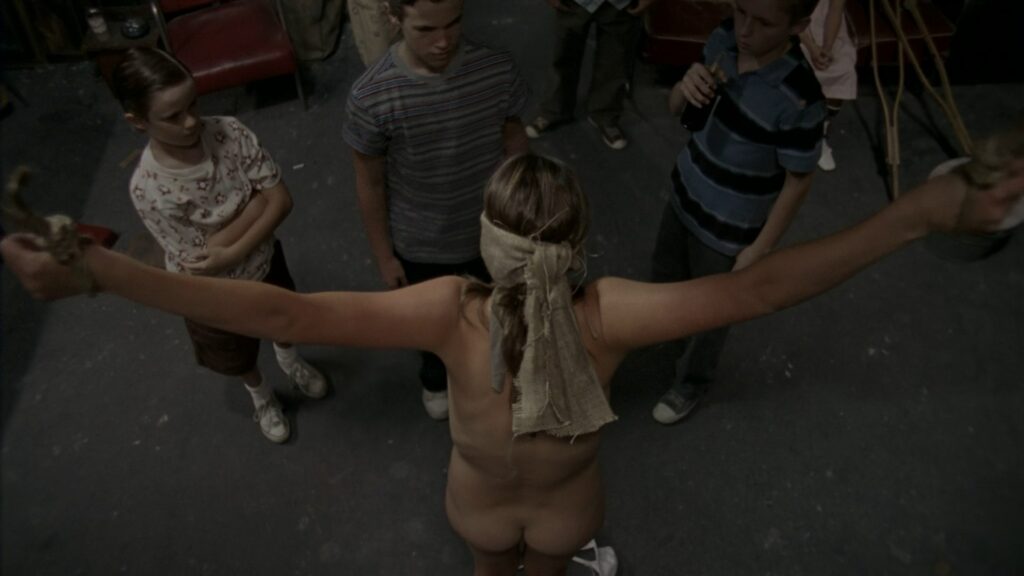 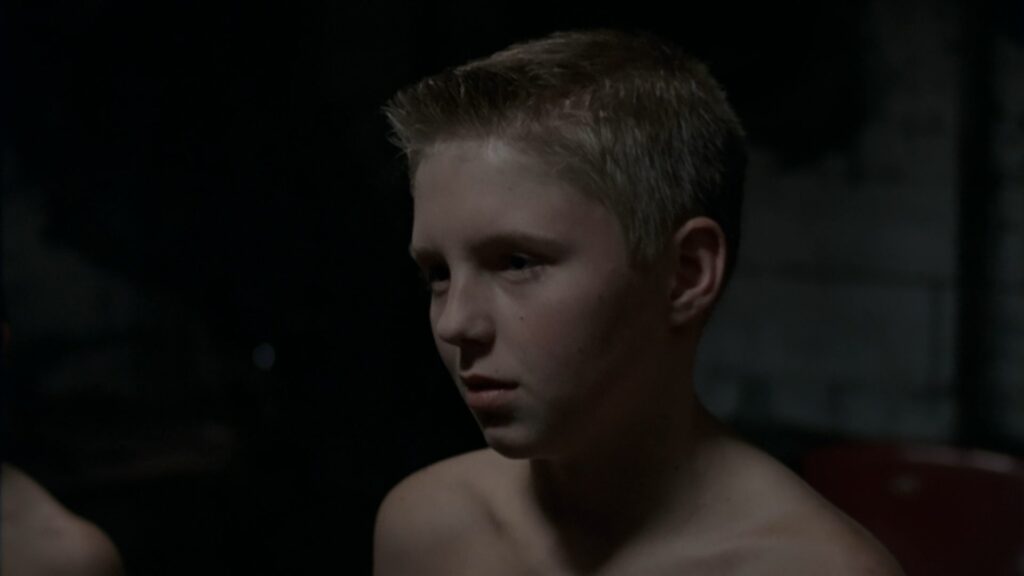 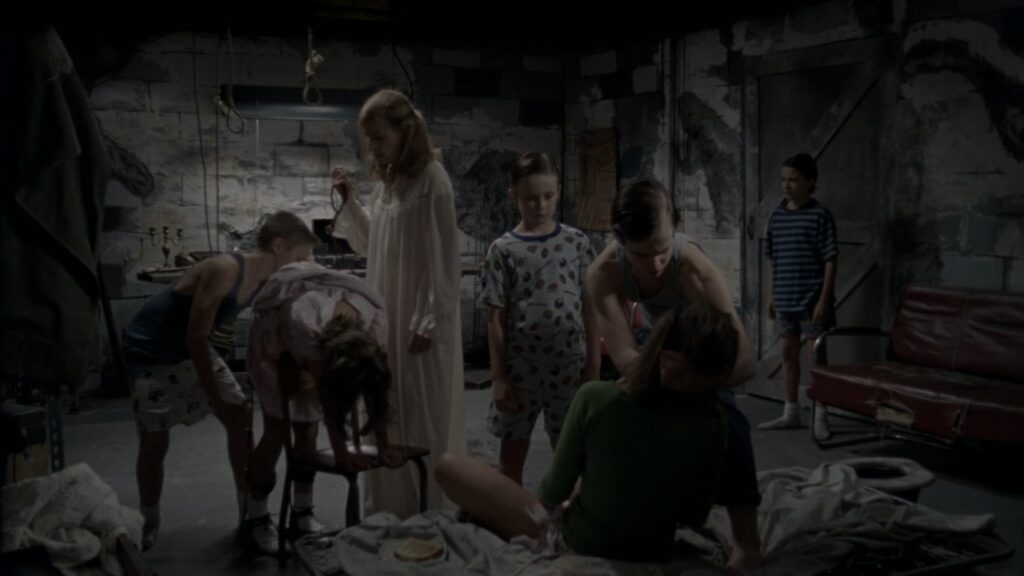 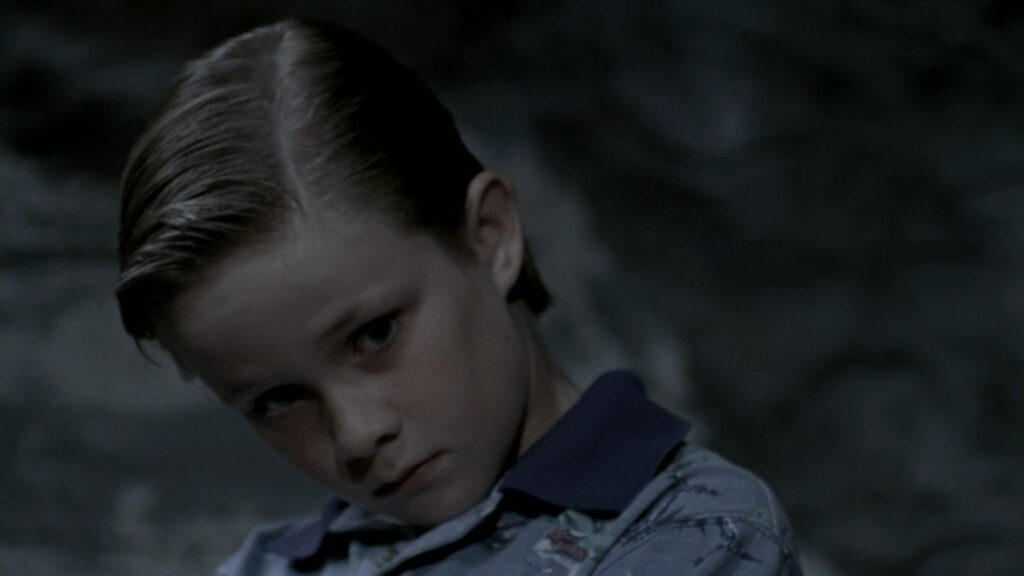 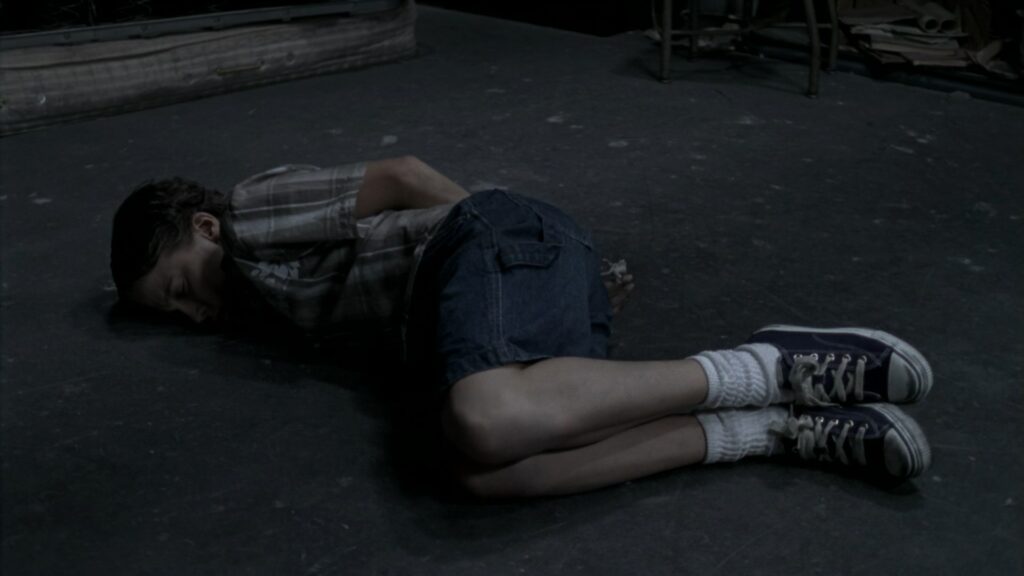