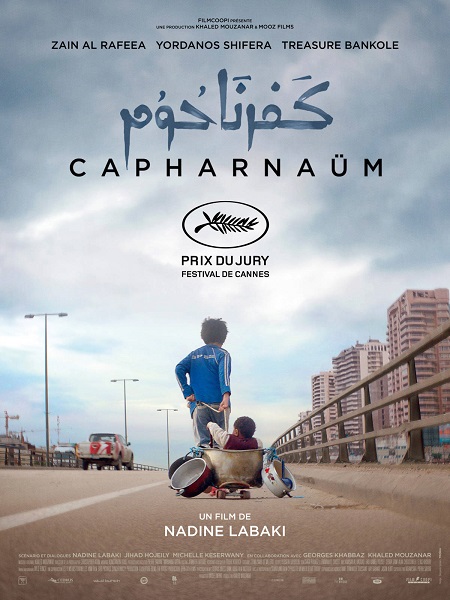 While serving a five-year sentence for a violent crime, a 12-year-old boy sues his parents for neglect.

Capernaüm (“Chaos”) tells the story of Zain (Zain al-Rafeea), a Lebanese boy who sues his parents for the “crime” of giving him life. The film follows Zain as he journeys from gutsy, streetwise child to hardened 12-year-old “adult” fleeing his negligent parents, surviving through his wits on the streets, where he meets Ethiopian migrant worker Rahil, who provides him with shelter and food, as Zein takes care of her baby son Yonas in return. Zein later gets jailed for committing a violent crime, and finally seeks justice in a courtroom.

With his family grappling with extreme poverty, forever indebted to their ruthless landlord, the sad twelve-year-old boy, Zain, is forced to fend for himself in the squalid and overcrowded slums of Beirut. Unable to save his eleven-year-old sister, Sahar, from an uneasy arrangement, Zain will soon find himself all alone in a faceless city, ending up at a small amusement park to befriend another lost soul: the Ethiopian cleaner and mother of one, Rahil. But, in this grim and hostile world, there is no room for dreamers–and as a horrifying discovery is the last straw–a rabid desire for retribution possesses Zain and his blood-thirsty knife demands justice. Who is to blame when love becomes hate, and life turns into an unendurable torment?