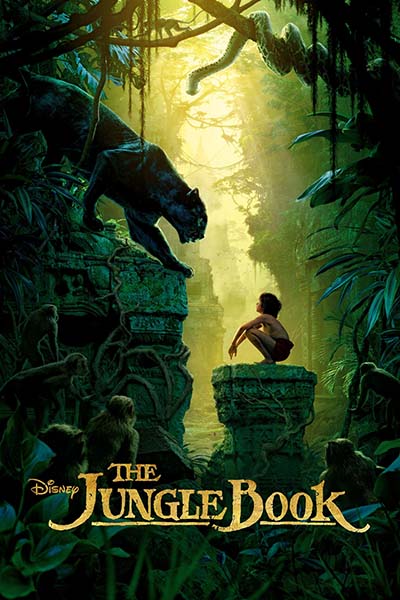 The panther Bagheera opens the film by saying that there are many stories in the jungle, but none quite like that of the man-cub Mowgli. Mowgli is seen running through the jungle above the trees with his wolf brothers. Since he was a baby, Mowgli has grown up with the wolf pack, raised by Raksha.

The jungle experiences a very dry season, so the animals come together by the Peace Rock to form a truce and drink water from there. Mowgli uses the shell of a fruit to grab water for himself, which makes the other animals see him oddly. The wolf pack leader Akela tells Mowgli not to use his man tricks in front of the other animals. The crows then begin to caw, signaling the arrival of the fearsome tiger Shere Khan. He is aware of Mowgli’s presence and considers Man to be forbidden in the jungle. Akela covers Mowgli and tells Shere Khan he cannot have the boy. Shere Khan vows to come for Mowgli once the rivers run again.

Knowing the jungle isn’t safe for Mowgli anymore, Akela and the other wolves discuss his future there. Bagheera volunteers to take him back to the man village, despite Raksha’s protests. The others agree it’s for the best, and Mowgli shares a goodbye with Raksha, who says he will always be her son.

Bagheera guides Mowgli toward the village, but once they come across a field of buffaloes, they are ambushed by Shere Khan. Bagheera holds the tiger off for Mowgli to run. Mowgli runs down a hill as the buffaloes stampede. Shere Khan tries to spot Mowgli, but the boy escapes.

Shere Khan returns to the Peace Rock to confront the wolves. He mauls Akela and throws him off the cliff. The tiger then assumes leadership over the other animals and awaits for Mowgli to return.

Now wandering alone through the jungle, Mowgli comes across a huge snakeskin that has recently been shed and soon meets the python Kaa. She puts Mowgli under her spell with her hypnotic voice and eyes. Kaa tells Mowgli of where he came from. He was an infant when his father came across a cave in the jungle and protected him from Shere Khan with the “red flower” (fire). Mowgli’s father blinded Shere Khan’s left eye, and the tiger killed the man. Kaa wraps herself around Mowgli and prepares to eat him but is attacked by another animal, forcing her to release the child.

Mowgli wakes up and meets the bear Baloo. Since he saved Mowgli’s life, he asks the boy to help him gather some honey from a cliff face. Mowgli breaks off some honeycomb but gets stung a few times in the process. Thankful, Baloo takes Mowgli under his wing (or paw) and they form a friendship. Baloo shows Mowgli that the man village is nearby and that he can go whenever he wants, but Mowgli decides to stick with Baloo, who shows Mowgli all about the “bare necessities of life.”

Bagheera encounters Mowgli and Baloo. Baloo claims that Mowgli is helping him hibernate for the winter, until Bagheera points out that bears don’t hibernate in the jungle. The panther still wants to get Mowgli to safety.

At night, Mowgli hears a herd of distressed elephants. Baloo and Bagheera see this and get worried until they watch Mowgli help a baby elephant out of a hole. Bagheera tells Baloo how Shere Khan is after Mowgli and that he needs to get to safety. Reluctantly, Baloo tells Mowgli he never thought of him as a friend and wants him gone. Heartbroken, Mowgli retreats to a tree. A small monkey starts to bother Mowgli, and soon more monkeys show up and capture him. Baloo and Bagheera see this and follow.

The monkeys bring Mowgli to the temple of King Louie, a massive orangutan. Louie claims he can protect Mowgli, but he wants to learn the secret of the red flower (fire) and thinks Mowgli can deliver it to him. Mowgli says he cannot, sending Louie into a rage. Baloo and Bagheera arrive in the nick of time and fight Louie’s monkeys while Louie chases Mowgli. Louie taunts Mowgli by telling him that Akela has been killed, which Bagheera knew about. As Louie tries to get Mowgli, he runs through his temple, causing it to crumble and crush him.

Infuriated that Bagheera didn’t tell him about Akela, Mowgli runs away. He enters the man village undetected and takes a burning torch back into the jungle. As he runs back, the other animals see him with the fire and follow. A piece of ember falls from the torch and slowly starts a fire.

Mowgli confronts Shere Khan as the other animals gather to watch. Shere Khan tries to turn the animals against Mowgli by stating that man has brought the red flower into the jungle. Mowgli tosses the torch right before Baloo and Bagheera show up. They, along with the other animals, stand by Mowgli and against Shere Khan. Baloo battles Shere Khan. Mowgli wants to fight, but Bagheera says he must fight as a man and not as a wolf. Mowgli runs toward the trees. Shere Khan takes Baloo down, but before he can kill him, Raksha and the other wolves attack Shere Khan.

Mowgli sets up a trap in the trees and waits for Shere Khan. Escaping the wolves and Bagheera, the tiger climbs the tree and walks the branch where Mowgli is standing. The boy tells Shere Khan he is not afraid of him. The tiger pounces at Mowgli as the branch snaps. Mowgli jumps to safety, but Shere Khan ends up falling and is consumed by the fire. Mowgli returns to the other animals, and the river, aided by grateful elephants, turns its flow, putting out the fire.

Mowgli is seen running with his wolf brothers again and is reunited with them and Raksha. Baloo now lives close with Mowgli, Bagheera and the other animals, and he says he could get used to this. 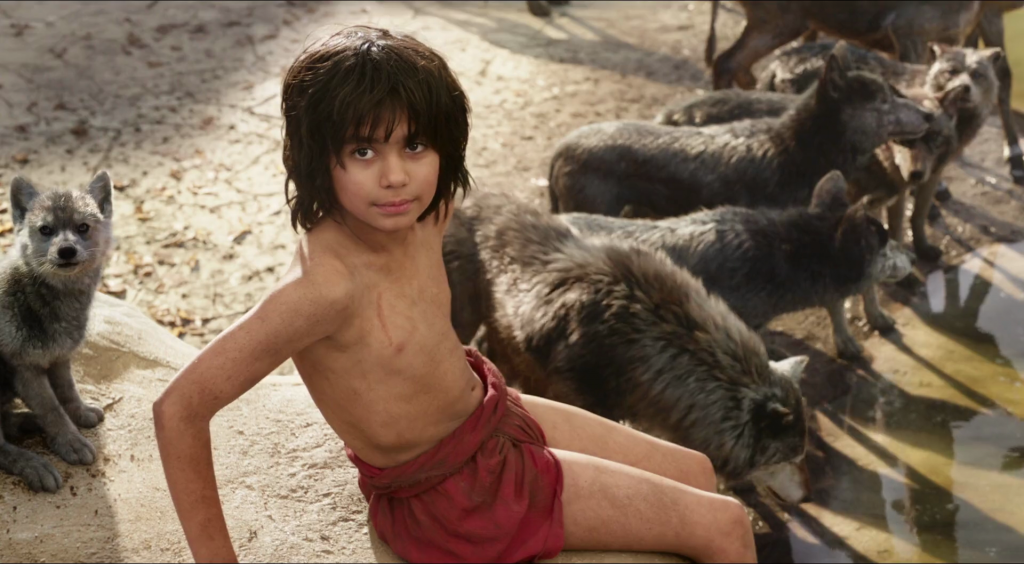 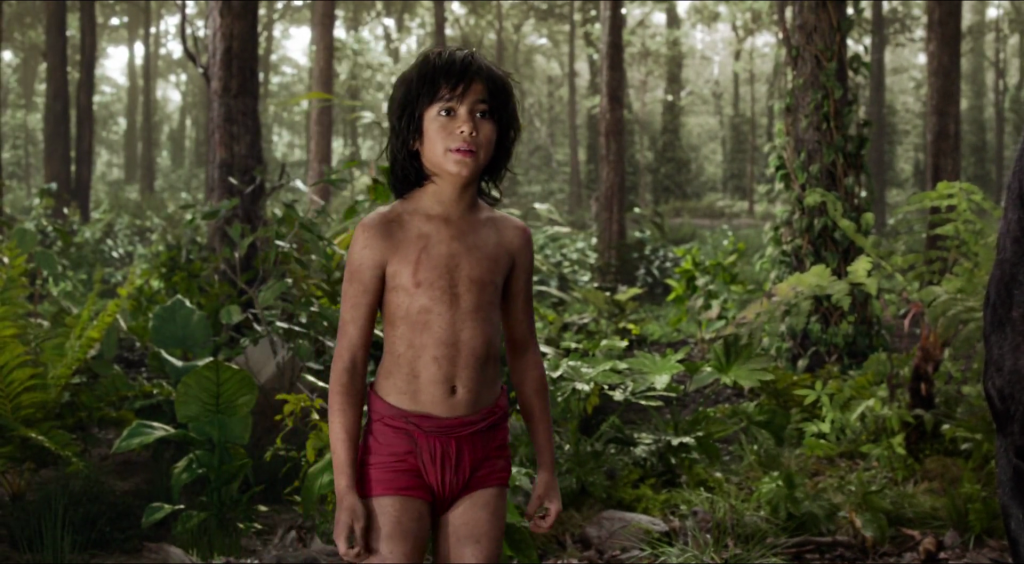 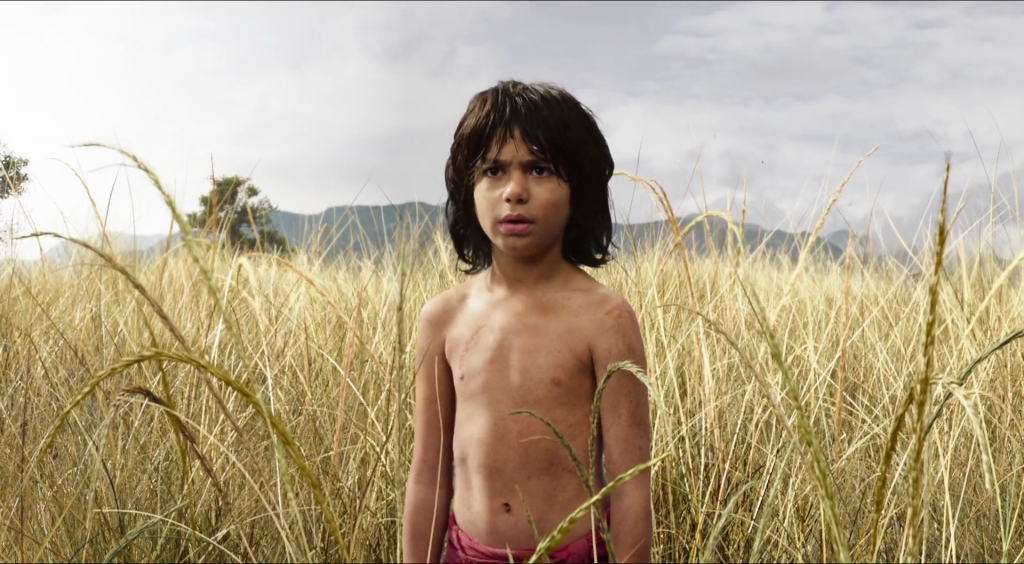 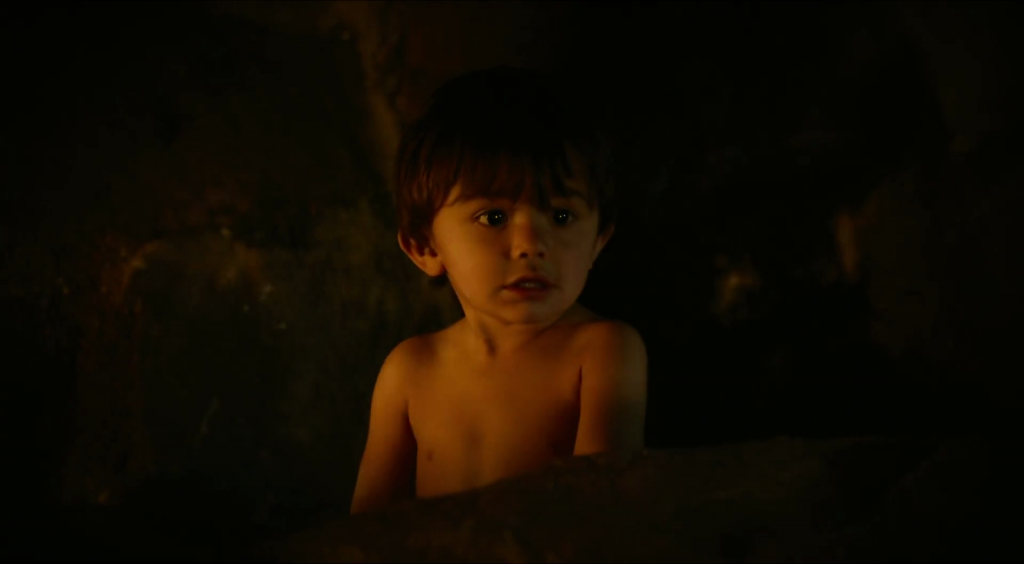 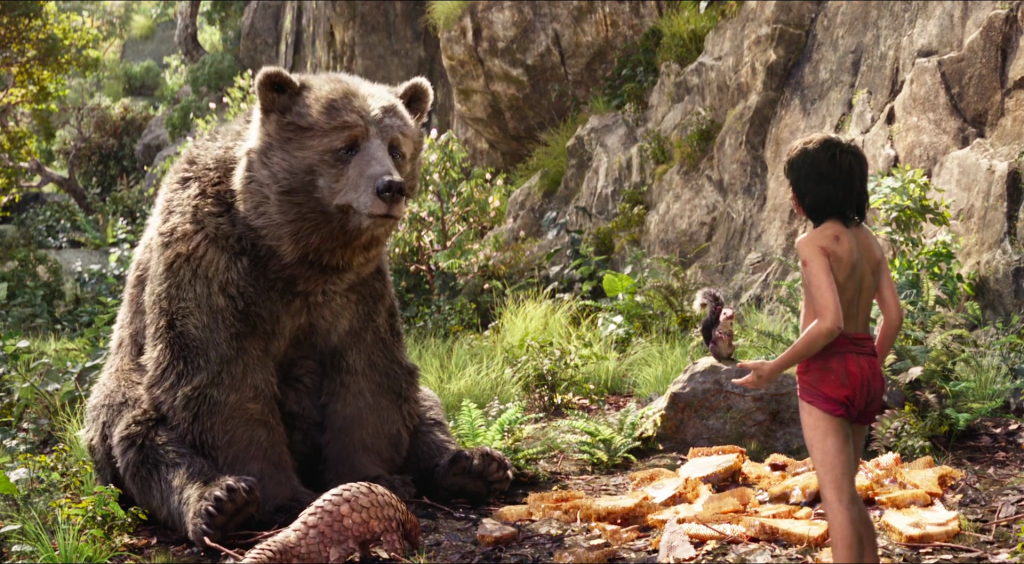 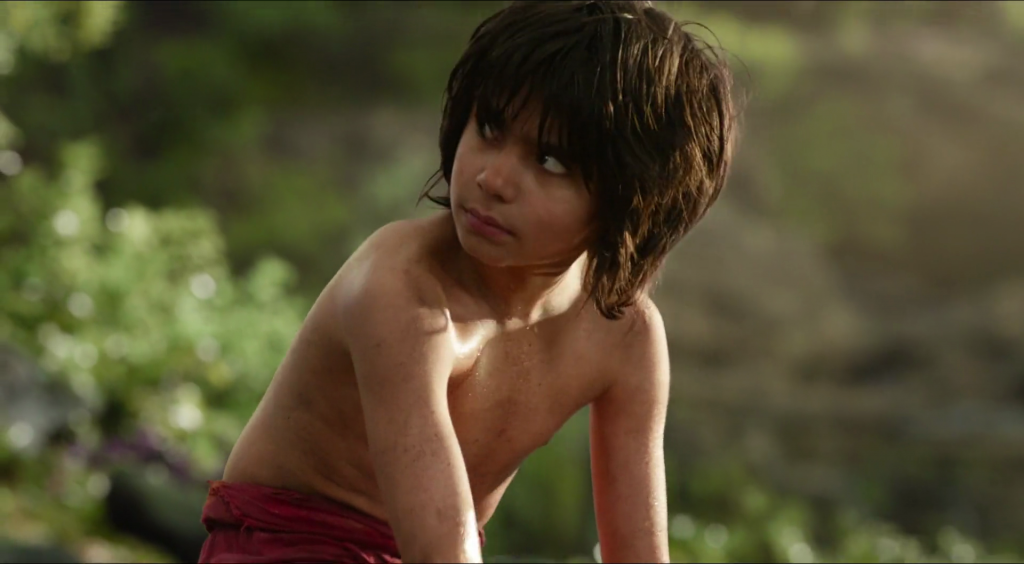 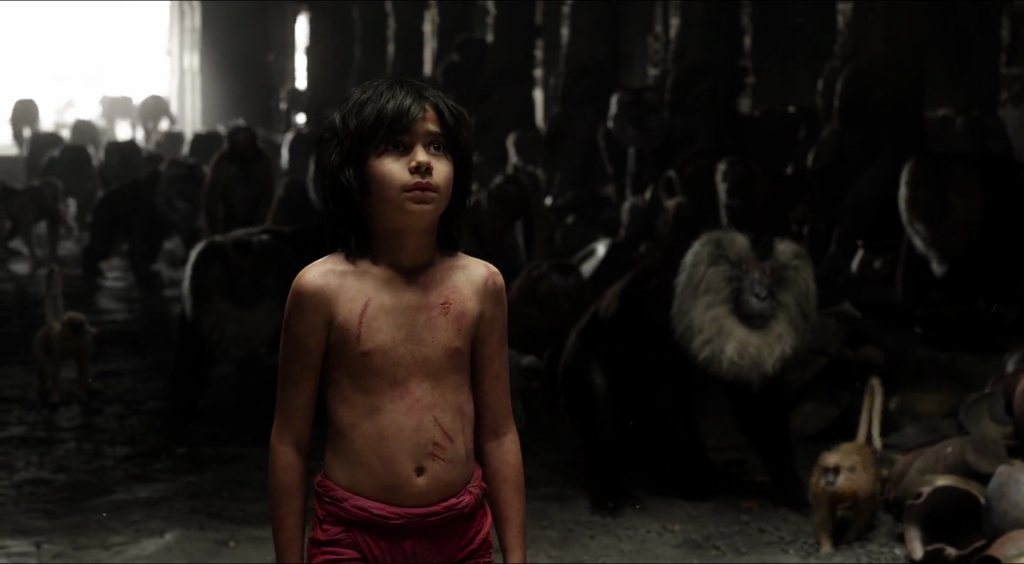 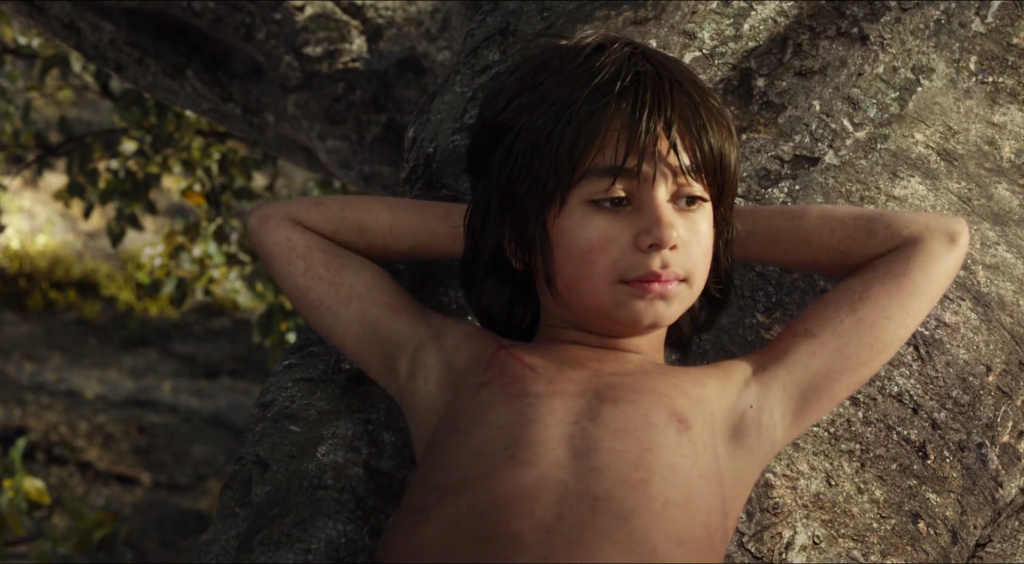