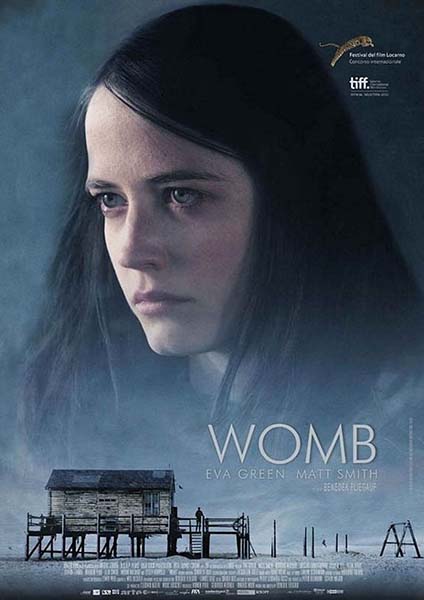 As children, Rebecca and Tommy establish a fairy-tale romance. After being separated for many years, they are reunited as adults, but their passionate relationship is short-lived when Tommy is killed in a freak car accident. Devastated, Rebecca feels that life cannot go on without him. Her consuming love compels her to bear Tommy’s clone. Despite the great joy of having her Tommy back, Rebecca cannot fully escape the complexities of her controversial decision. When he grows to young manhood in the exact image of her beloved, how will Rebecca explain away the confusing urges that new Tommy doesn’t understand?

Rebecca (Eva Green) is a pregnant woman who caresses her belly while having a drink all alone at an empty beach.

Two children at an empty beach. She seems to be about to change, but she stops because he’s looking at her. Tommy, 10 years old (Tristan Christopher) and Rebecca, 9 years old (Ruby O. Fee) meet and eat an apple together under a broadwalk in the heavy rain. The next day, he throws peebles at her window to go to play together. Rebecca is pretending to have fallen asleep so that his father won’t tell her to go home for the night. When Thomas’ father comes to check on her and sees that she’s sleeping, her father on the phone agrees to let her spend the night there. The next morning, the children ride their bikes in the cold beach, armed with coats, scarves and hats.

Grandpa has fallen asleep on a chair, and they look at his skin with a magnifying glass. When it looks like he’s going to wake up, they run away. On another occasion they look at a small snail. While they stare at its slow movements, they talk about their lives away from the holiday location. Tommy kisses Rebecca on the lips. Later, she is having a bath – she is leaving in the ferry at 6:00 with her family. Tommy is left behind, a lonely child once again, while the ferry silently leaves.

An adult Rebecca stares at the morsel sculpture on the pier. Rebecca has returned from Japan, where her family lived. An adult Thomas (Matt Smith) was with another girl and there is an uncomfortable silence for everybody: Thomas is amazed at her having come back. The girlfriend smokes a cig while listening to the conversation until she decides to leave for good. It’s raining when Rebecca is about to leave, but you can feel that they still have feelings for each other. Thomas says that the girl was not really a girlfriend – he undresses and swims in the sea, while Rebecca giggles. He has dinner, she stares at him, they end up having sex together. They stop the car to go in a seemingly empty road, but another car arrives and can’t avoid but killing Thomas in spite of trying to halt to a stop.

He has written to her I’LL WAIT FOR YOU FOR AS LONG AS IT TAKES in a piece of notebook page which was inside of a matchbox with the shell of the dead snail. Rebecca stares at photographs of Thomas all over the place. Thomas’ parents are evidently very distraught. Rebecca stares at a wall full of reminiscences from Tommy.

Rebecca is heavily pregnant. She visits Thomas’ tomb. The baby is born (Anna-Zsófia Drávucz, Jerun Minguell Agundez, Kata Petra Kiss and Péter Erik Tóth). When he is 5 years old, Thomas (Jesse Hoffmann) uses a quilt to hide and talk with his mother. Rebecca supposedly kisses him under the quilt, – although this may be my guess.

Thomas talks a poem standing naked in the bath, while her mother is also having a bath stark naked. She claps and then hugs him in what I consider an awkward and inappropriate way. Other mothers have a problem with Rebecca and Thomas’ situation, and they don’t want it to affect their own children. A teacher (Amanda Lawrence) agrees with the mothers. Thomas, meanwhile, was playing with his friend Eric (Adrian Wahlen). The mothers stare at cocky Rebecca while she is riding after Thomas. All this leads to Thomas’ birthday party being a complete failure, because Molly (Ella Smith) and all the rest of mothers and children refused to be Thomas’ friends. Thomas is upset at this, of course, and shouts to his mother. Rebecca gives him a moving toy dinosaur to be of some consolation.

Finally, Thomas finds a friend of his own – a neighbour of his own age. Rebecca works from home through her computer.

Another day, mother and son are playing, and he sits on top of her as though he were a love whom she were playing with. The awkward situation is solved when that new male friend appears – they play with the toy dinosuar burying in the beach while it’s still moving.

Years later, Thomas – the son, now looking exactly like his biological father /clone – (Matt Smith) goes out with Monica (Hannah Murray) and there’s another awkward moment when Rebecca finds them on bed after having had sex. The relationship is disturbing to Rebecca, although she doesn’t want to admit it, probably not even to herself. She sits by Thomas in his bed while he’s sleeping. He covers him with a bedspread and lies down herself by his side. He wakes up startled after caressing her own mother, thinking it was Monica.

Rebecca hides herself and watches her son and Monica about to have sex. Monica and Thomas’ relationship keeps on getting stronger and stronger. The grandmother on-the-father’s-side appears – Thomas has had a sea bath, naked, with Rebecca. Thomas can’t even recognise her grandmother, who stares at Thomas in almost disbelief. Monica sees everything in disbelief. Rebecca runs inside whimpering. Monica, Rebecca and Thomas have a conversation during breakfast, and he leaves in anger.

After a bath, and Monica having gone away, Rebecca gives his son his father’s laptop. He is even more angry at her, but they both end up having sex.

That night, Thomas decides to leave home for good. Rebecca tries to refrain herself from saying or doing anything. Thomas walks and becomes smaller and smaller as he seems to approach the horizon.