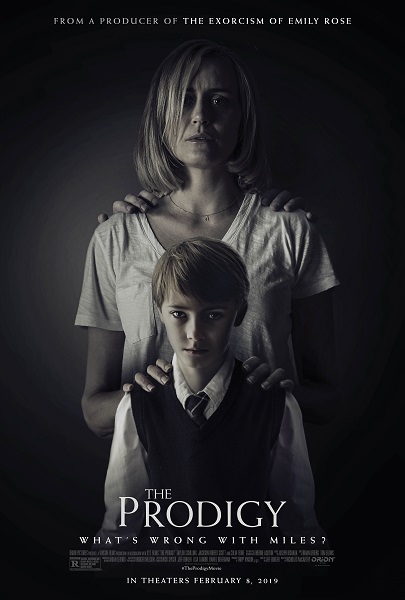 The film opens in Ohio where a young woman named Margaret St. James (Brittany Allen) escapes from a home where she was held captive. She runs toward the road and gets a woman to stop and help her, and she sees that Margaret’s right hand has been severed.

Meanwhile in Pennsylvania, a couple named John (Peter Mooney) and Sarah Bloom (Taylor Schilling) are heading to the hospital for the arrival of their baby. As Sarah goes into labor, police in Ohio arrive outside the home of Edward Scarka (Paul Fauteux), the man who captured Margaret. He walks outside nude to surrender with something behind his back as the officers have their guns drawn on him. Scarka raises his hand and is gunned down. They see that he is holding Margaret’s hand. Moments after Scarka dies, the Blooms’ son Miles is born with blood in the same places where Scarka was shot.

Over time, Miles turns out to be an oddly calm child. He doesn’t cry when getting shots (or just doesn’t cry ever), but also demonstrates unsettling behavior, like grabbing a spider just to crush it, and then speaking Hungarian in his sleep. Sarah also notes to her friend that Miles has heterochromia (two different eye colors).

Miles grows to be eight years old (now played by Jackson Robert Scott). John and Sarah go out on a date and leave him with a babysitter named Zoe (Elisa Moolecherry). After watching TV, Zoe offers to play Hide and Seek with Miles before putting him to bed. As he goes to hide, he loosens a light bulb to the basement. Zoe walks downstairs to find him while barefoot, ending with her stepping on a broken glass cup and getting a large shard stuck in there. When Sarah talks to Miles about it, he claims to not remember even playing the game, let alone how Zoe ended up at the bottom of the stairs with a bloody foot.

As Miles sleeps later that night, Sarah goes into his room and hears him whisper “Go fuck yourself.” He starts to speak Hungarian again before waking up startled. Sarah suggests he had a bad dream, but he says he was having a good dream.

Another incident occurs at school when Miles wants to work on a project with a girl, but she is already working with another boy. Miles goes to the janitor’s closet and grabs a wrench before bringing it back to class to beat the boy. Miles is later taken to see a psychologist named Dr. Elaine Strasser (Paula Boudreau). She later meets with Sarah and a colleague named Arthur Jacobsen (Colm Feore). They reviewed a tape that Sarah recorded of Miles speaking Hungarian, and Arthur says that it’s a rare dialect that only a small portion of people in Hungary speak. It translates to something threatening and insulting toward a woman. Arthur mentions a time he went to India and spoke to a six-year-old boy named Padman who claimed to have remembered a past life of his, including his siblings, his mother’s favorite song, and the moment in which he died by drowning. He suggests that Miles has a separate personality in his head and that they need to get Miles to be his normal self before the dark personality becomes dominant. Sarah dismisses what the two say as ridiculous, but they give her a video to watch on a similar case.

The family’s dog Tallulah disappears. John takes Miles to go looking for her on the streets, and Miles starts making disturbing comments alluding to Tallulah being dead, as well as the abuse John suffered at the hands of his father. John confronts Sarah about this since he thought she said something to Miles, but they discover that the boy had placed a camera behind a picture of them to spy on them. After Miles later suggests that John had been abusing him, John angrily steps out of the house and stays elsewhere for a while.

Sarah wakes up at night and finds Miles at the end of the hallway crying for her. She calls for him to run to her, but as he runs through the darkness, he briefly morphs into Scarka and grabs Sarah. This is just a nightmare that she wakes up from. Miles then comes into her room and asks to sleep next to her for the night. Miles lays beside her and reaches for her hand. He asks Sarah if he will always love him no matter what he does, and Sarah hesitantly replies yes. Soon, Sarah notices flies buzzing around the room, and throughout most of the house. She goes to the basement and smells something awful. On the floor is blood and a rotted severed paw. Sarah sees something at the bottom propped up with a wooden board and knows that Tallulah is in there. She tries to pry the board back until Miles brings her a hammer to to do. Sarah pulls it off and Tallulah’s body spills out, her throat having been cut. After John returns to find out about this, they decide they have to do whatever it takes to make Miles normal.

Sarah brings Miles to visit Arthur. He meets with Miles privately to hypnotize him and bring out the good Miles personality before the Scarka personality takes over. Miles appears possessed and starts scratching into the couch before Scarka starts to speak for Miles, and he threatens Arthur with making it look like he had been drugged and molested if Arthur tries to fix Miles. He orders Arthur to tell Sarah that the process didn’t work. After they leave, Arthur notices that Miles managed to scratch Scarka’s name into the couch. Arthur calls Sarah late at night to get her to look up Scarka’s name on the computer where Miles can’t see her. She learns that Scarka was a serial killer who murdered multiple women and always severed and kept one of their hands as a trophy. Scarka also had heterochromia and died 15 minutes before Miles was born. Arthur figures that Scarka may have come back because he feels he has unfinished business.

Sarah goes into Miles’s room and discovers that he (or Scarka) has been keeping newspaper clippings and articles on Margaret, who went on to write a memoir about her ordeal with Scarka. Sarah realizes that Scarka’s soul still lingers because his unfinished business is Margaret.

John and Sarah prepare to take Miles to a hospital to help him. As John drives him away from home, he starts tearfully telling Miles that he loves him. The boy responds by cutting John’s seat belt with scissors and then stabbing him in the side, causing John to crash into a tree. Sarah finds them at the hospital and is told by the doctor that John must be kept in a coma for a few weeks as the swelling in his brain goes down.

Sarah decides it is time to end things once and for all. She takes Miles and gives him sleeping pills so he won’t see her go into a store to purchase a gun. She drives to Margaret’s house and pretends to be a victim that was inspired by her book so that Margaret will allow her inside. After talking, Sarah goes to the bathroom and vomits as she is not prepared to kill an innocent woman. She loads her gun and draws it on Sarah, but she ultimately can’t pull the trigger. Margaret then sees Miles has broken in and is holding a knife. He says the same line to her that Scarka did when she met him, regarding his different color eyes. Miles stabs Margaret and gets her on the floor, stabbing her again in the stomach and then slashing it before he snarls to her that she never should have run away from him. Sarah tries to help Margaret, but it is useless. She runs after Miles as he walks through a field. Sarah yells at Scarka and asks why he is still there if his business is complete. He tells her that the boy that was Miles was gone the moment Sarah said she would love him no matter what he did, and now Scarka is in full control of the body. Sarah takes her gun out to shoot him, but she is shot down by a neighbor. Scarka feigns the innocent boy persona and runs to the man for comfort as Sarah slowly dies.

Sometime later, Scarka, still fooling others as Miles, is taken in by a foster family. The mother invites him inside, and he focuses on her hands. As the boy walks up to his room, he looks in the mirror to see Scarka’s reflection staring back at him.