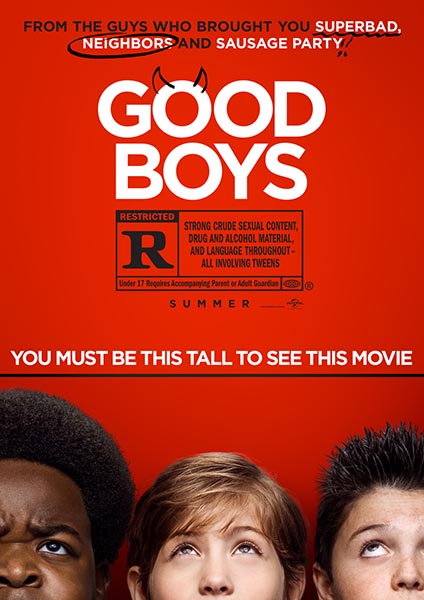 Max hangs out with his best friends Thor (Brady Noon) and Lucas (Keith L. Williams). Together, they call themselves “The Bean Bag Boys”. They hang out at Thor’s house where they are annoyed by his younger sister Annabelle. The boys then play a game where Thor ends up with a baseball card valued at up to $600.

The next day, the boys go to the skate park so Max can check out his crush Brixlee (Millie Davis). He and Thor are then met by the “cool” boys, led by Atticus (Chance Hurstfield). He brings the boys to a hidden spot in the park where he pulls out a beer bottle. They take turns sipping it, but when it gets to Thor, he chickens out despite bragging about sipping tons of beers. Atticus starts to mock Thor and gives him the name “Sippy Cup.”

Lucas goes home to his parents (Retta and Lil Rel Howery) giving him his favorite meal (lasagna and orange soda), only to drop the news on him that they are getting a divorce.

At school, the boys are in choir class, and Max can see that Lucas is upset, but he won’t tell him or Thor about the divorce. Thor wants to sign up for the upcoming performance of “Rock of Ages,” but he backs out when Atticus sees him signing up and says singing is for “try-hards.” Later during lunch, Max is called over by another popular boy named Soren (Izaac Wang). He invites Max to a “kissing party”, where all the girls, including Brixlee, will attend. Max asks if he can invite Thor and Lucas too, but Soren thinks they are “too random.” Max promises that they will be well-behaved.

After school, the boys try to find out how to kiss to prepare for the party. They look up porn to try and see it for themselves, only to be disgusted at what they witness. They then find a sex doll (which they think is for CPR) and practice on it as well. The boys then use Max’s dad’s drone to spy on his neighbor Hannah (Molly Gordon) and her friend Lily (Midori Francis) to see how to kiss. They observe Hannah’s sort-of boyfriend Benji (Josh Caras) coming over to deliver drugs, but after Hannah puts him in the friend zone, Benji rudely tells her off. The girls then see the drone in the sky and catch it with a pool net. The boys run over to try and get the drone back, but the girls refuse to do so due to the boys spying on them.

When the boys get back to Max’s house, Thor reveals he stole Hannah’s bag. They dump out the contents and find a bottle of vitamins that they struggle to open. Hannah’s phone then rings, and they tell the boys that there is something of value in the bag. They all meet up at the playground to make the exchange, but when the girls mention that there is molly in the bag, the boys are hesitant to give the drugs back to keep them off the streets. Max then gets the idea to use the drone’s remote to fly it out of the girls’ reach, but he accidentally ends up steering it into the path of a school bus, completely destroying the drone. The boys then run off to school to get away from the girls, but they beat them to the school first. Lucas then calls out for SCAB (the school’s anti-bullying group) to protect them, but it only humiliates Max and Thor. They later hide in the bathroom and decide to skip school to try and get a new drone before Max’s dad comes home.

The boys go back to Thor’s house to get the rare card to sell it. They find a buyer who agrees to get the card and will meet them at the house. The boys then get a bunch of “weapons” (actually sex toys) from Thor’s parents’ closet. The buyer, Claude (Stephen Merchant), arrives. The boys suspect he might be a pedophile, but after seeing he is harmless, they let him in. As they are about to give Claude the card, Lucas backs out and says the card is representative of their friendship. Claude then spots the sex doll, which the boys claimed was Thor’s mom, and he offers them $400 for it. They take the money, and Claude leaves after saying he would have paid more for it.

With the money in hand, the boys ride their bikes to the mall, but they are found by Hannah and Lily, who were tracking them because they still have Hannah’s phone. The boys try to ride away from them, but Lily chases them on foot. Lucas ends up crashing his bike and flies into a truck, severely dislocating his arm. Max scares Lily away by telling the truck driver that she’s their babysitter who is trying to molest them, so she bolts out of there and jumps back into Hannah’s car. Max and Thor pull Lucas away and go to pop his arm back into place. During this time, Lucas admits that things won’t hurt less since his parents are divorcing.

The boys go to a convenience store to get medicine for Lucas, while Thor decides to smuggle a beer to impress the cool kids. A cop, Officer Sacks (Sam Richardson), walks in. Max and Lucas panic and try to act “normal”, but Lucas cracks under pressure and admits they are carrying drugs. Thor also walks by trying to smuggle the beer in his pants, but Sacks takes the beer and the drugs and promises not to report them as long as they stop annoying him. Thinking he is lying, the boys lock him inside the store using one of Thor’s parents’ dildos. Thor also managed to sneak another beer in his jacket.

The mall is in sight, but the boys discover they must cross a highway. They get past the first few lanes easily since traffic is moving easily, but once they get to the next set of lanes, the cars start moving faster. The boys get nervous, but Max runs first, followed by Lucas, and then Thor almost makes it but drops his beer and then causes a major accident as cars swerve to avoid hitting him. The boys then run to the mall, only to be told by the saleswoman at the store that the drone they ordered was sold to two girls – Hannah and Lily. They also left the boys a note for where to meet them.

The boys meet the girls in a tunnel, where they reveal to Hannah and Lily that they don’t have the drugs. They order Max, Thor, and Lucas to buy them again from Benji at his frat house, but Hannah reminds them not to say she sent them there. They almost succeed in getting the drugs, but Lucas once again blabs that Hannah sent them. Benji refuses to give up the drugs, so Max pulls out a paintball gun from Thor’s house and demands that they get the drugs since he is desperate to go to the party. An air horn blows and startles Max, causing him to accidentally hit Benji with a paintball. His frat brothers start trying to fight the boys, but they keep getting hit with paint balls. Thor gets punched in the face, and Lucas accidentally flips a guy onto a table. They grab the drugs and run to the girls.

The girls drop the boys off somewhere after making their trade, but Lucas and Thor no longer have interest in going to the party. Max then gets a call from his dad saying he got an early flight back and is headed home in 15 minutes. Max flies the drone back toward his house and enters through the chimney, but the camera lens gets covered in soot, making it hard to see. Max tries to navigate through memory and accidentally destroys his dad’s office, but puts the drone back in place. His dad sees and angrily calls him to ground him. The boys then get into an argument as Max tells Thor and Lucas that Soren only invited him and not them. Max also calls Thor out on not auditioning for the play just because he cares what the other boys think. They all start crying and go home individually.

Max’s parents scold him as he takes the full blame for the day’s events. Thor’s mom informs him of this and thinks her boy is innocent. Lucas naturally tells his parents everything, but they think he is just stressed out over the divorce and just try to give him some helpful advice.

Lucas goes to Max’s house and convinces him to sneak out to go to the party. He tricks Max and Thor into meeting up again to try and reconcile, but neither one wants to deal with the other. The boys enter Soren’s house and go to the basement. Thor takes out his beer bottle and tries to beat Soren’s record of three sips. He makes it to four sips and is no longer known as “Sippy Cup,” which even impresses Soren. The kids then gather to play Spin The Bottle. After witnessing one kiss, Lucas is grossed out and he excuses himself to stay upstairs to play VR. Brixlee then spins, and the bottle points to Thor. Knowing how Max feels about her, Thor gives up his turn. Atticus starts trying to make fun of him again, but Max shuts him up. He follows Thor and tries to apologize for their fight, but he tells Max that what he said about him holding himself back is true. He encourages Max to go after what he wants. Max approaches Brixlee and asks to kiss her. She says yes, and Max gets his first kiss.

Upstairs, Thor joins Lucas. Hannah and Lily show up, high off their gourds, as it is revealed that Lily is Soren’s older sister. The girls ask the boys what they really want, and Lucas says he just wants to play video games. Thor admits his passion for singing, and the girls ask him to sing. He starts to sing “I Wanna Know What Love Is.” This plays over a montage of him going to audition for “Rock of Ages”, despite auditions being over, and he ends up winning the part of Stacee Jaxx. Over the next month, Max goes out with Brixlee, but she breaks up with him. He starts going out with another girl, Taylor, but she leaves him for Brixlee. Lucas goes on to join SCAB to protect other kids, while Thor performs in the show and is beloved by his friends, family, and classmates.

Thor’s family throws a party to celebrate the play. Max shows up with a new girlfriend, Scout, while Lucas is there with a new friend that plays video games with him. The boys acknowledge that while they may end up going separate ways, they vow to be together for all of the important events. The three share a big hug, but before they go, Thor invites Max and Lucas to go upstairs for a surprise. They go to his parents’ room to find a giant swing. They play on it for a while until Annabelle comes in to tell them that their parents have sex in it.