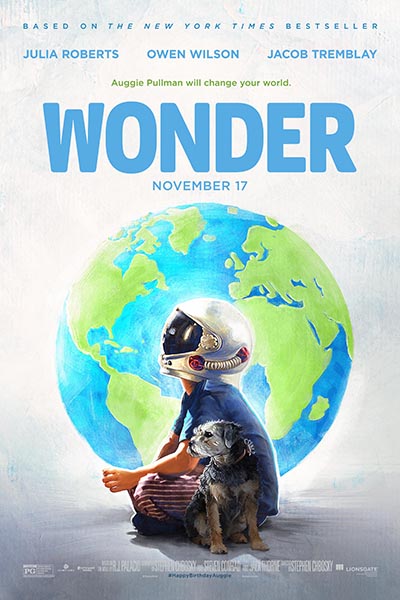 August “Auggie” Pullman (Jacob Tremblay) sees himself as an ordinary kid. He loves science, is a big fan of “Star Wars”, and Halloween is his favorite holiday. He lives in upper Manhattan with his parents Isabel (Julia Roberts) and Nate (Owen Wilson), sister Olivia, AKA Via (Izabela Vidovic), and their dog Daisy. Auggie just says he doesn’t look ordinary. He describes his birth as “hilarious” – the doctor who delivered him was a teenager on his first day, and Nate was holding a huge camera. The doctors ran out of the room with Auggie when they took a look at him. Since then, Auggie has had 27 surgeries to help him see, breathe, and make him look somewhat more “normal”. Because of his facial deformity, he has been home-schooled and he frequently wears an astronaut helmet to hide his face.

Auggie is set to start attending Beecher Prep, a private school. Nate is worried about Auggie being around other kids because he knows how they will react upon seeing him, but Isabel wants Auggie to start now or it’ll just get harder later on.

Isabel brings Auggie to the school for a tour. They meet Mr. Tushman (Mandy Patinkin), the school’s director. He introduces Auggie to the three kids who will be giving him a tour – Jack Will (Noah Jupe), Julian (Bryce Gheisar), and Charlotte (Elle McKinnon). The kids bring Auggie to their classes, with Charlotte rambling on about her various acting gigs. Julian teases Auggie, but Jack and Charlotte are nicer to him.

The whole family goes to take Auggie to school on his first day. Isabel worries that the other kids will be mean to Auggie. He enters his first class with Mr. Browne (Daveed Diggs) as his teacher. Jack, Julian, and Charlotte are all in his class. After Auggie is called on to speak and mentions his love for “Star Wars”, Julian starts calling him Darth Sidious. Throughout the rest of the day, the other children stare at Auggie and avoid making contact with him.

Isabel picks Auggie up, and he immediately puts on his astronaut helmet. He runs to his room crying. Isabel tries to comfort and encourage him to not let what the other kids say bother him.

We shift to Via’s perspective, with her talking about life with Auggie as her brother. She loves him and is also protective over him. Via was especially close to her grandmother (Sonia Braga). A flashback shows them on the beach at Coney Island.

On Via’s first day of school, she sees her best friend Miranda (Danielle Rose Russell), whom she hasn’t seen all summer since Miranda was at camp. Miranda has pink highlights and sits with a new group of girls, to Via’s disappointment.

Via meets Justin (Nadji Jeter), who convinces her to try out for the drama club and their upcoming production of “Our Town”. She decides to sign up.

At school, Jack starts to approach Auggie even as the other kids have referred to making contact with him as “catching the Plague”. Jack quickly befriends Auggie, being the only kid he talks to at school. Isabel is delighted when Auggie invites Jack to come over for a play date.

On Halloween, Isabel allows Via to stay home from school so they can spend the day together. At Beecher, Auggie goes as Ghostface (from “Scream”) instead of his original planned Boba Fett costume since Daisy threw up on it. Auggie loves Halloween because he can wear a mask and not feel like a freak. However, when he gets to class, he sees Julian and the other boys with a Darth Sidious mask and mocking Auggie. He even overhears Jack saying he would kill himself if he looked like Auggie. Auggie leaves and is picked up by Isabel when he claims to feel sick. Via goes into Auggie’s room, upset over missing out on her day with their mom but also concerned for Auggie. He tells her what he heard Jack say. Although he wants to quit school, Via convinces him he shouldn’t.

Daisy starts to get more sick, and Isabel takes her to the vet. She and Nate return with just her collar. The whole family misses her.

We go to a flashback scene when Jack was picked to give Auggie a tour. He was already dreading having to do it with Charlotte and Julian. His mom tells him to help Auggie because of an incident from a while back where Jack’s little brother cried upon seeing Auggie at an ice cream shop.

From Jack’s interactions with Auggie, he says that Auggie is the first kid he genuinely wanted to be friends with. He has enjoyed getting to know him and seeing how funny and smart he is. However, he has noticed that Auggie has stopped talking to him since Halloween.

Auggie is once again sitting alone at lunch. He is approached by a girl from his class named Summer (Millie Davis), who is also friendly to him when her other friends tease Auggie. He thinks Tushman sent her to spend time with him, but she insists that she wants to sit with him. Summer asks him why he and Jack stopped talking, and he tells her.

At Via’s school, she gets the role of understudy for the character of Emily, while Miranda earns that part. Outside of school, she starts to date Justin. Miranda sees them together and misses Via. She later calls the Pullman house to talk to Via, but she instead talks to Auggie, tearfully telling him she misses him and Via.

From Miranda’s point of view, we listen to her talking about how the Pullmans were like her second family since he own parents hardly supported her. It was Miranda that gave Auggie the astronaut helmet as a Christmas gift. She went away to summer camp and told everyone that she was basically living Via’s life, with her pretending that Auggie is her actual brother. It made her popular at camp, but when she came home, she was ashamed to talk to Via since she lied about her own life.

Jack goes up to Summer and asks her why Auggie stopped talking to him. She only tells him “Ghostface”. It takes him a while to piece it together, but he realizes he saw Auggie overhearing what he said about him on Halloween. During science class, the teacher pairs Jack and Auggie together since they are table buddies, but Julian and their friend Amos (Ty Consiglio) had planned to work with Jack. Jack chooses to stay with Auggie. After class, Julian goes up to Jack and asks why he wants to work with a “freak”. Jack responds by punching Julian in the face and getting into a fight with him that their teachers must stop. Jack never tells Tushman what Julian said so he won’t get in trouble either.

While playing on Minecraft, Auggie and Jack meet up and chat in the game. Jack apologizes to Auggie for what he said, and they become friends again. They later get together to work on a science fair project.

Auggie and Jack make a box that projects an image from outside to the inside of the box. Julian and Amos try to show off a volcano, but it malfunctions on them, leading everyone to laugh at them. Auggie and Jack’s project wins first prize.

Julian later starts to leave cruel notes on Auggie’s desk and locker. They put a photo-shopped picture of the class without Auggie and a note on the back that says “Do everyone a favor and die!” Tushman calls Julian’s parents in to discuss the bullying. His parents don’t seem to care for what he’s done and think it’s more of a problem that Auggie was admitted, with Julian’s mom claiming that he’s had nightmares because of him and that the other kids are too young to deal with this sort of thing. When Tushman doesn’t side with them, Julian’s parents decide to pull him out of school when the year is up. He becomes distraught because it would mean leaving his friends. Julian apologizes to Tushman for what he’s done.

The Pullmans go to Via’s school for the play. Miranda realizes that nobody would be there to cheer for her, so she fakes being sick to let Via be Emily for the night so that her family can see her and be proud of her. Via goes up and gives a good performance.

Auggie’s class goes on a nature trip near the end of the year. While the class is watching “The Wizard of Oz”, Auggie and Jack sneak out to have fun elsewhere. They are then harassed by three seventh graders who mock Auggie for his look. They start to physically harass the boys until Amos and two other boys show up to defend Auggie and Jack. They knock the leader of the seventh graders down and let the boys run for it. Afterwards, all the boys go by the lake to watch the sunset.

It is now the end of the school year at graduation. Tushman goes up to present the Henry Ward Beecher Medal to an exceptional student whose character was demonstrated through their schoolwork and relationships with others. The award goes to Auggie. The entire school gives him a standing ovation, even Julian. Auggie goes up to accept the award and he bows before everyone.