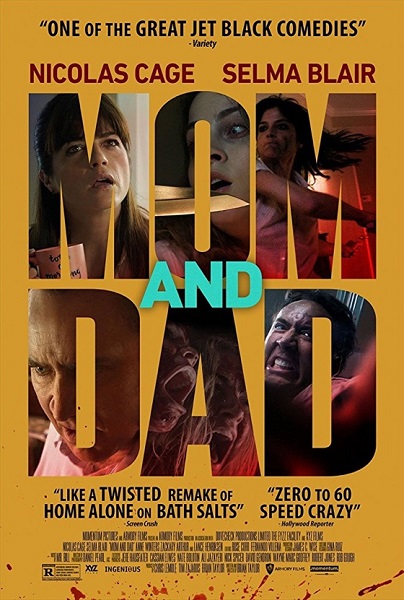 The film opens with a mother putting on soothing music for her child as she sets her car on railroad tracks and leaves the child in the car to die.

Then, we are introduced to the Ryans. They are a family of four with a strained relationship. Brent (Nicolas Cage), the father, does not approve of his teenage daughter Carly’s (Annie Winters) new boyfriend; Carly is angry with him, as well as her mother, Kendall (Selma Blair), whom she considers out of touch. Carly also fights with her much younger brother, Josh (Zackary Arthur), who annoys her. Carly is forced to cancel plans with her boyfriend, Damon (Robert T. Cunningham), for dinner with her visiting grandparents.

As Carly is at school, an unexplained static starts transmitting through all TV screens and radios. The effect is seen as the Ryans’ housekeeper murders her own daughter with a meat tenderizer in front of a terrified Josh. Suddenly, a mob of parents rushes Carly’s school in an effort to kill their children by any means they can. Carly escapes the school with her best friend Riley (Olivia Crocicchia) and hides out at her house, where Riley’s mom attacks and strangles Riley to death. Carly runs home in terror, running into Damon – who has killed his own father in self-defense. Damon tells Carly that the parents appear intent on only wanting want to kill their own kids but not other people, and accompanies her home to get Josh somewhere safe.

After an exercise class, Kendall goes to the hospital to be present for her younger sister Jenna’s (Samantha Lemole) baby, but the static transmits just after Jenna gives birth, causing her to attempt to kill her baby. Kendall escapes from the hospital, seeing reports of the mass hysteria on television – the static gives parents a natural instinct to slaughter their children. In an effort to protect her own children, Kendall heads home. Brent heads home as well, as he is bored at work.

Upon seeing Carly with Damon at home, the hysteria fully overtakes Brent, and he knocks Damon out and attacks Carly. Kendall joins him upon getting home; having been infected by the signal through her car radio. Carly and Josh escape them and lock themselves in the basement. Kendall and Brent bond over their shared desire to kill their children, and run a hose from their oven’s gas pump to the basement in an effort to poison the kids. When Carly sees the gas, she rigs up a trap with matches at the basement door and hides with Josh in the house ventilation system. Brent cuts the door’s lock off and opens the door, igniting the gas and triggering an explosion that knocks Kendall and Brent out and wakes Damon up.

Damon helps Carly and Josh evade their parents, but Kendall wakes up, stabs him in the cheek with a wire hanger, and pushes him over a stair railing, knocking him out again. The parents close in on the kids, but are interrupted by the doorbell; Brent’s parents have arrived for dinner. When Brent opens the door, his mother pepper sprays him and his father stabs him… revealing that the unknown hysteria affects grandparents as well. Everyone chases each other through the house. Josh evades Brent, who attempts to hide from his father in his car in the garage. Kendall chases Carly outside and hits her in the head, but Brent’s mother attacks her before she can finish Carly off.

Brent starts the car, drives it out of the garage, and crashes it, killing both his parents and knocking himself out again. Kendall prepares to finish Carly off, but Damon knocks her out with a shovel to the head.

Kendall and Brent wake up to find themselves restrained in the basement with Carly, Josh, and Damon watching them. They continue to exhibit symptoms of the hysteria, and the kids refuse to let them go. Kendall tearfully tells the children she loves them and asks to let them go. Brent continues, “But sometimes, we just want to–“. The film ends before he can finish his sentence… leaving everything unanswered.